A New Year without old Hinderances

You're probably thinking, based on the name of this post, that this is just another in a long stream of posts and conversations that crop up this time of year about New Year's resolutions and the goals we set for ourselves to make this new year our best one yet. And while some of the same concepts of re-evaluating ourselves, our habits, and our relationships certainly apply, I pray that the Holy Spirit would give us divine discernment and guidance and ignite in all of us an intense desire this year to turn our inward focus upwards to the One that supplies us with our every need and in Whom we are made complete by His gracious love!
Making goals for ourselves is a wonderful, wonderful practice! Healthy diet changes are good for our bodies, watching less TV is good for the mind, and choosing to be a more positive person is good for the soul. But, as believers, let us take a step back for a moment from our goal-making and think about it in a way we might have missed.
In the book of Thessalonians, Paul, a man devoted to spreading the truth of Christ throughout many different cities of his day, writes with intensity to the believers in the city of Thessalonica about his intense efforts to reconnect with them after having been separated from them for a time. Imagine being separated from a close friend that really needed your presence in a very difficult time of their life and you won't be far off from his feelings as he wrote. These were people that he had grown to love after ministering to them and living with them; people for whom he knew the unique features of their faces and personalities, people that he called brothers and sisters, people, that he writes, his heart was still with although he was separated from them physically.
In 1 Thessalonians 2:17-18 Paul says, "Dear friends, after we were separated from you for a little while (though our hearts never left you), we tried very hard to come back to you because of our intense longing to see you again. We wanted very much to come, and I, Paul, tried again and again, but Satan hindered us."  [ For emphasis, you could re-read that passage and replace the word "separated" with the word "orphaned" and you would come closer to the original Greek connotation.]


* You and Me Forever, Francis and Lisa Chan, 2014 Claire Love Publishing
** Children of the Day, Beth Moore,  2014 Lifeway Press
Posted by Brittany Swain at 2:46 PM No comments:

Yesterday, a few of our dancers had the opportunity to bring some Christmas cheer to Grace Lutheran Church in Destin. Amidst beautifully decorated tables with festive centerpieces, the ladies of Grace Lutheran gathered for a Christmas tea to usher in this joyful season, spend some precious moments together, and give thanks to the Lord for His infant birth.

Backstage, our younger dancers giggled with each other and twirled in sparkly costumes and asked if they could watch the other pieces before it was their turn. The older dancers helped each other get ready, and although some of them had come from pretty busy schedules, you could tell they were happy to be together doing something they loved.
The hostess welcomed the guests, opened in prayer and then it was time to dance! Our Ballet Conservatory dancers did a fantastic job bringing excerpts from this year's Nutcracker! Russian, Spanish, and Chinese Variations, the Party Scene March, and Dolls....it was a special sneak peek for the Dec 20th and 21st performances at South Walton High School. The Calling presented a piece from our upcoming "I AM" May concert and the girls did a wonderful job!
It's a busy time of year, and although the performance didn't last long, it was a special few moments of coming together and sharing our gifts with others and creating a few special memories. I pray that each of us is able to take some time this season and step back from the busy-ness of this month and say a special prayer of thanks to Him who allows us each day. A very special thank you to Mrs. Poppell for allowing The Calling to be a part of yesterday's performance and a special prayer of blessing to all those involved in Nutcracker! You all dance beautifully and are such a joy to watch! 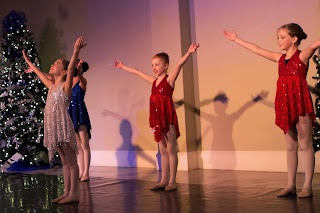 Posted by Brittany Swain at 2:27 PM No comments: 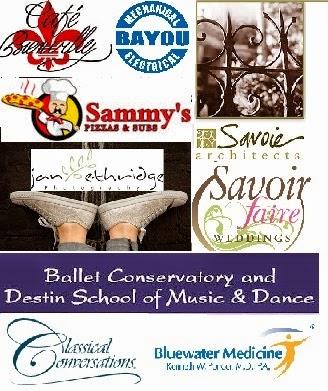